Stories of Winnie-the-PoohTigger comes to the forest.


I have already told before how much I Love this book. Today we read and play along the chapter in which Tigger comes to the forest.
Having a passion for style, I just do not dare to put it in my words, as it would go so boring, I can not but quote all the key phrases, and it is not easy to make the story shorter, so prepare to read lots of A.A.Milne's text, which is a remarcable reading.

Winnie-the-Pooh woke up suddenly in the middle of the night and listened. Then he got out of bed and lit his candle, and stumped across the room to see if anybody was trying to get into his honey-cupboard, and they weren't, so he stumped back again, blew out his candle, and got into bed. Then he heard the noise again.

At this thrilling moment Tasya can not help getting up and playing along.
She comes to the bookshelves with a torch in her hand saying the words:
What is it? What a strange noise! Who can it be? Is that you, Piglet?
I am very impressed by her play, so I get the candle, light it and let her hold it.

"Is that you, Piglet?" Winnie-the-Pooh said.
But it wasn't.
"Come in, Christopher Robin," he said.
But Christopher Robin didn't.
"Tell me about it to-morrow, Eeyore," said Pooh sleepily. But the noise went on.
"Worraworraworraworra," said Whatever-it-was, and Pooh found that he wasn't asleep after all.
"What can it be?" He thought.
He got out of bed and opened his front door.
"Hallo!" said Pooh.
"Hallo!" said Whatever-it-was.
"Oh, there you are! Come here."
So Whatever-it-was came here, and in the light of the candle he and Pooh looked at each other.
"I'm Pooh."
"I'm Tigger"
"Oh," said Pooh, for he had never seen an animal like this before.
"Well", said Pooh, "it's the middle of the night, which is a good time for going to sleep. And to-morrow morning we'll have some honey for breakfast. Do Tiggers like honey?"
"They like everything", said Tigger cheerfully.

From this moment we swap the roles, now I am Winnie-the-Pooh, and she is Tigger, and it is needless to say that it is just because she is very bouncy.
I take my gown (which serves us a tablecloth here) and put it on the stool to make Pooh's table. We are going to have honey for breakfast here.

"Excuse me a moment, but there's something climbing up your table", and with one loud WORRAWORRAWORRA he jumped at the end of the tablecloth, pulled it to the ground, wrapped himself up in it three times, rolled to the other end of the room, and after a terrible struggle, got his head into the daylight again, and said cheerfully: "Have I won?"

Yeah, she plays well this struggle with my gown, all children love rolling, don't they?

"That's my tablecloth" said Pooh as he began to unwind Tigger.
"I wondered what it was," said Tigger.
"It goes on the table and you put things on it".
"Then why did it try to bite me when I wasn't looking?"
"I don't think it did," said Pooh.
"It tried, but I was too quick for it."

And here comes my favourite epsode, may be because my daughter happens to be very fastidious about her food. She loves this episode too, because she likes to use her mimics and to produce different sounds.

Pooh put the cloth back on the table, and he put a large honey-pot on the cloth, and they sat down to breakfast. And as soon as they sat down, Tigger took a large mouthfull of honey... and he looked up at the ceiling with his head on one side, and made exploring noises with his tongue, and considering noises, and what-we-got-here noises... and then he said in avery decided voice:
"Tiggers don't like honey".
"Oh!" said Pooh, and tried to make it sound Sad and Regretful. "I thought they liked everything".
"Everything except honey", said Tigger.
...So after breakfast they went round to see Piglet, and Pooh explained as they went that Piglet was a Very Small Animal, who didn't like bouncing, and asked Tigger not to be too bouncy just at first. And Tigger, who had been hiding behind trees and jumping out on Pooh's shadow when it wasn't looking, said that Tiggers were only bouncy before breakfast, and as soon as they had had a few haycorns they became Quiet and Refined.

And here we play Catch My Shadow game. I move all ways trying to make my shadow difficult to catch and Tasya chases it.

So by-and-by they knocked at the door of piglet's house. (We use a baby toy as Piglet)
"Hallo, Pooh," said Piglet.
"Hallo, Piglet, this is Tigger. They like haycorns," said Pooh, "so that's what we've come for, because poor Tigger hasn't had any breakfast yet."
"Help yourself" said Piglet and moved coser to Pooh and felt much braver, and said, "So you're Tiger? Well, well!"
I put the baby toy next to my side and press it tight to show how scary little Piglet is.

But Tigger said nothing because his mouth was full of haycorns.
Again Tasya makes her exploring noises and what-have-we-got-here noises and says:
"No! I don't like haycorns!"
"But you said Tigers like everything except honey!" - I exclaim.
"And haycorns" - said Tigger.

And Piglet who was rather glad that Tiggers didn't like haycorns, said,
"what about thistles?"
"Thistles," said Tigger, "is what Tiggers like best!"
"Then let's go along and see Eeyore," said Piglet.

And I pick up a toy, Tasya's black-ship toy, which looks rather gloomy and it plays the role of Eeyore.
"Hallo, Eeyore!" said Pooh. "This is Tigger."
"What is?“ said Eeyore.
I play Eeyore part, so I let the black ship "walk" around Tigger one way and the other way with the words: "what did you say it was?"
"Tigger, he's just come." explained Piglet.

And the next phrase produced by Eeyore is sidesplitting:
"When is he going?"

“Dear Eeyore, the thing is my new stripy friend had not had any breakfast yet. And as Tiggers always eat thistles we have come to see you." Pooh explaines.
"Come this way, Tigger", Eeyore led the way to the most thistly-looking patch of thistles that ever was, and waved a hoof at it. "Help yourself, Tigger,"
"Are these really thistles?" Tigger looked anxiously at Pooh.
"Yes" said Pooh.
"What Tiggers like best?"
"That's right", said Pooh.
"I see," said Tigger and took a large mouthful and he gave a large crunch.
"Ow!" said Tigger. He sat down and put his paw in his mouth. "Hot!" mumbled Tigger.
"No Tiggers do not like thistles!"
"But you said that Tiggers like everything except honey and haycorns." - said Pooh.
"And thistles".
"What are we going to do?" asked Piglet.
"Come along, we'll go and see Kanga. She's sure to have lots of breakfast for you".

Tasya likes to play kangaroo, he usually takes a teddy and tucks it in her tights as if it is her joey sitting in a pouch.

Kanga offered Tigger to look in the cupboard and see what he would like. But the more Tigger put his nose into this and his paw into that, the more things he found which Tiggers didn't like. And when he had found everything in the cupboard and couldn't eat any of it, he said to Kanga, "What happens now?"
But Kanga was standing by the Roo, watching him have his Extract of Malt.
"What is it?" asked Tigger.
"Roo's strengthenig medicine, he hates it".
So Tigger came closer and suddenly he took one large gollop, and, with a sudden jump of surprise Kanga said, “oh, Tigger, dear!" - but the malt had gone.

Then Tigger looked up at the ceiling, and closed his eyes, and his tongue went round and round his chops, and a peacefut smile came over his face as he said. "So that's what Tiggers like!" 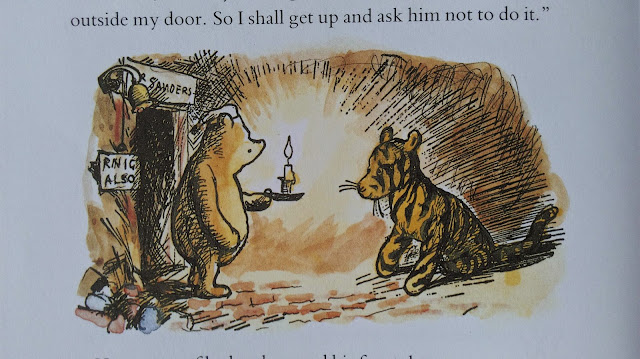 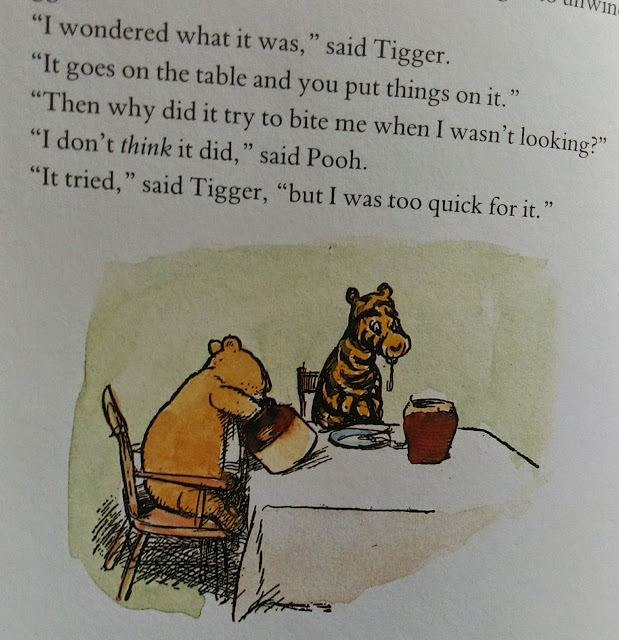